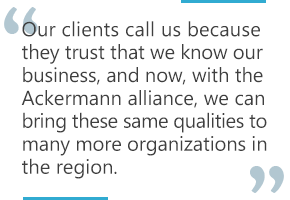 Leadership Capital Group has been a primarily North American and European business until 2010 when it opened its first Latin American office in Costa Rica. Since then, the firm’s consultants have executed dozens of projects in the LATAM region and have become trusted advisors to many multinational United States- and European-headquartered companies as well as to many local companies in the region. The Latin America division of Leadership Capital Group is unique in nature, with the partners and principals having developed and led retained search engagements in the US and Europe as well; the team brings true global perspective to the search process and a clear understanding of the need for accurate assessment of candidates to determine fit for companies in the region.

In an interview with Marc Lewis, CEO and Jason Hall, Managing Director, Latin America at Leadership Capital Group, they stated, “When we decided to come to Latin America to build our first office in 2010, our strategy and vision was very simple: we needed to be our clients’ trusted advisors in the region, similar to what our United States and European teams have done. Our clients call us because they trust that we know our business, and now, with the Ackermann alliance, we can bring these same qualities to many more organizations in the region. We are in LATAM because we love what we do, and seeing the difference that we make in our clients’ organizations, including the positive effect that our candidates bring to these businesses, as well as the growth of the local emerging economies and markets.”

Leadership Capital Group is comprised of a prestigious Advisory Board and a team of seasoned human capital consultants who provide competitive Board of Director and C-level executive benchmarking as well as succession, governance, Board and management assessment services. Leadership Capital Group’s team and Advisory Board is global, including individuals in six states and eleven countries in the Americas, Europe and the Middle East & Africa. The firm has conducted search engagements on five of the seven continents and 28 of the 50 United States. In addition to where team members are located in the US, UK, France, Spain, Belgium and across Latin America, Leadership Capital Group has conducted search engagements in 40+ countries. Over nearly 20 years, the Partners and Principals of the firm have led more than 2,500 CEO, President, COO, CIO, CTO, CHRO, CMO, Country Manager and Board of Director searches primarily in the Americas and EMEA, and over 1,000 SVP and VP searches. The Leadership Capital Group and Ackermann alliance strengthens Leadership Capital Group’s accessibility to its multinational clients throughout the entire region.

The talks between Ackermann and Leadership Capital Group commenced with a London meeting in 2014. “Our respective firms are similar in culture and vision for the LATAM region, we share a special passion for the business and our colleagues are entrepreneurial while process oriented. It was unbelievable, I felt like LCG had been spying on us”, smiled and said Sam Pimentel, President of the Ackermann Group. One year later, the two firms have joined forces and are on their way to raising the bar for premier executive search in Latin America.